Today, I though I would talk once more about the dreaded D- dyskenesias-

We have all seen patients and heard stories of the horrible life of having dyskenesias – many are so terrified that they avoid taking medications altogether.

As you can see there are several abnormal hyperkinetic (unwanted or excess) movements disorders some of which are symptoms and whole diseases by themselves. any of which can occur in any one given individual but the key is the timing and relation to other symptoms and medication intake. also important to note that only idiopathic Parkinson patients develop dyskinesias. 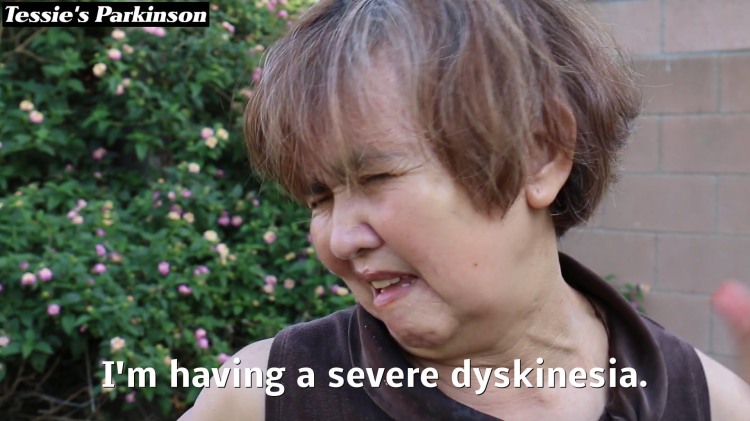 If you have any of the above plus parkinsonism especially if not responding to medication, have more confusion at early stage, bladder problems or even balance issues especially if gait is wide – you are NOT dealing with idiopathic Parkinson’s disease and warrants further evaluation.  also of importance if it seems there is a strong family component or heredity to these movements most likely NOT Parkinson’s disease.

If Parkinson symptoms began after being on anti-psychotics, anti emetics (nausea medications), sleep aids, lithium, or depakote then you don’t have typical PD most likely.

Now let’s say you got diagnosed with PD and were responding well to treatment and then suddenly one day you just began having abnormal involuntary symptoms on one side of body or just one limb and is constant or lasts only a few minutes- this is NOT dyskenesia until proven otherwise need to rule out seizures, strokes and tumors. Especially if you have only been on levodopa a very short time.

So okay in the old days the majority of people got dyskenesias and they had to live with them most likely, that’s because we had a very limited number of treatments and the best medicine was levodopa so very soon after diagnosis EVERYONE was on levodopa. What happened when patients symptoms advanced? Since we did not have better treatments we simply kept increasing the dose…asking patients to take more and more often as the receptors got over saturated subsequently having fewer and fewer positive effect only increasing the side effects..dyskenesias among others.

At the beginning of my training it was not uncommon to ask  patients to take levodopa every 2-3 hours and asking them to take 1/2 and 1/4 tablets at a time- However because they have carbidopa we were never able to make the doses quite right. when all else failed before the pallidotomies, thallidotomies  and hospitalized people for “drug holidays”. But fortunately in the mid 90’s things started to turn around for people with parkinson’s with the addition of dopamine agonists, then came Comt inhibitors, DBS and mao inhibitors. When I was in practice, I only had a handful of patients who took levodopa every 3-4 hours – and that was because they were already on Comtan and could not take inhibitors, could not do DBS and also were already on MAO inhibitors. But when the neupro patch and Stalevo formulations came out so many of those patients who took levodopa more than  3 times a day were able to cut back hence reducing the occurrence of dyskinesias or ameliorating them completely. As i have said many times before there are so many drugs that most of us should be able to find the right combination without overdosing and the KEY to preventing and decreasing these is taking small doses of various medications – a cocktail, kind of like the mambo #5 song-  a little bit of  Mardi Gras.. a little bit of Rita, little bit Erica.. a little bit of you.. so a little bit of levodopa, a bit of dopamine agonist, a bit of mao inhibitor, a bit of amantadine, a bit of comt inhibitor and a lot of you. if you are unable to tolerate meds and that’s the reason you take more than 4 doses of levodopa or because of cost of the others ..first comtan and Stalevo generic – although, I hate generics..generic stalevo which comes in 75, 100, 175, 200, and 225mg could not only solve a lot of these problems but also make it easier on your wallet and stomach because would be taking fewer pills.

Even after 10 years of PD, I take Parkinson’s medicines only 3 times a day- only when i travel and give lectures do I sometimes take 4 times a day – because if i need more i can substitute the rytary or stalevo for a higher dose. The other option for people that have busy active lives or cant tolerate medicines or have to take more than 4 times a day is to discuss with physician about surgical procedures like DBS. You should not be intimidated about taking levodopa because unfortunately not only is it the gold standard but it is so for good reason- because dopamine is the center of our being! dopamine agonist can only go so far in producing dopamine in the brain we need the actual substance to help us feel like ourselves again. i have discovered through the years of having the illness myself that is the lack of this which makes us forgetful, feel like we don’t care, feel anxious and even depressed to a certain point because serotonin is also needed for the latter. so by shying away we are doing ourselves a huge  disservice. this is the reason people keep adding more and more dopamine (levodopa) when they start feeling anxious – increasing the dopamine level is the right track but NOT by adding more levodopa (sinemet) because what happens if you keep pouring water over a glass that is already full? the excess is simply going to spill over right!  but if you are still thirsty need more levodopa since you cant fill a glass more than when is already full you simply drink more glasses of water- in essence this is what we try to do replenish the dopamine by circumventing the saturated receptors so we block its degradation ( mao inhibitors and comtan) so it last longer, we add substrate at the beginning of pathway to increase the production so when that dopamine blocking receptor falls below level you have more on the way ( another glass coming).

I hope this helps illustrate the need for early treatment with levodopa and also to consider taking more than one type of medicine to help keep you active and with fewer side effects. The best way to help yourself when already having dyskenesias is sketching the pattern, (when, how long, predictable, times a day?); if there is one medications can be adjusted and/ or DBS can done. If not pattern to involuntary movements they are random and unpredictable usually only way to treat is with surgical procedures.