Today, I will talk about something that we know little regarding the incidence and prevalence within the Parkinson’s population. This merits further investigation in my medical opinion because the truth is that Parkinson’s patients if not all a subset of the population may be at higher risk for having coagulopathies like clots in legs, lungs, heart and brain. I myself had really never made a link or thought about much until I began working closely with women with PD. first, came the realization from the work of Dr. A. Willis ( neurology assistant professor Department of University of Pennsylvania) whose worked revealed a larger incidence in strokes in older women with PD compared to men.  Then, I had a mini stroke and a mild lung clot ( PE-pulmonary embolism) last year which freaked me out especially since there was no “cause” found for this other than having traveled a bit that year but never had any leg clots. So the question remained why did I have this? Thought perhaps since I had had cancer that this was a sign cancer was back as it often occurs but thank goodness I am still cancer free. No other clot factor abnormalities found like protein S and C deficiency, factor V lieden, anti-phospholipid antibodies, and anti-thrombin all of which play an important role in coagulation. (These all need to be tested in young people who are hypercoagulable/have clots independent of whether or not have PD). 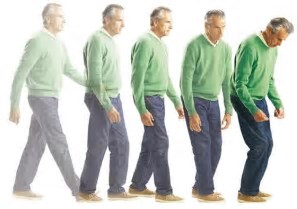 Surely, over the last year as I have been pondering this fact, I have come across 6 other women with PD who related to me also having PE’s and much bigger than mine. None of them had any other issues besides PD. Certainly 7 people (all women) including myself is not a very significant number but this was just in passing that I discovered this. I have not done a formal survey nor has one been done in this population as far as I know. Merely perusing through the web I found 87 different discussions regarding blood clots and Parkinson’s. I think there might be some validity to this risk or at least worth investigating further.

But, looking at what we know – First, patients who have Parkinson’s and GD mutation for Gaucher disease are at higher risk of having coagulation problems. This is because these patients not only produce less factors needed but also experience a chronic consumption of coagulation factors leading to frequent infarcts of the spleen and bone marrow. However, despite these abnormalities in coagulation, no evidence of increased coagulation (hypercoagulability was found according to one study.

Second, in a 1994 repot PE embolism was found to be second to pneumonia as cause of death in 60 autopsied patients with parkinsonian symptoms. Although, we don’t know much else about these patients. These could have been patients that already had hypercoagulation problems causing strokes leading to them to have a diagnosis of secondary Parkinson’s/parkinsonism.

Third, a study done in 2013 looked at the risk of deep venous thrombosis (DVT) in 114 asymptomatic Parkinson’s patients in relation to abnormal posturing in particular looking at the legs. They found 23 patients (20%) to have presence of clot. More importantly, half of those who had clots also had camptocormia (also known as bent spine). Furthermore, they discovered a correlation of greater incidence of Dvt’s with predisposing factors like diabetes.

They concluded that PD patients who have postural abnormalities are at higher risk for clots in legs and should be screened especially if they have other risk factors.

Fourth, we recently discovered a link between migraines and Parkinson’s. Researchers found that people with auras (that’s me), had a nearly 4 fold increase likelihood to report 4 out of the 6 PD symptoms they evaluated and those without aura had nearly 3 times increase. Furthermore, people with PD who have a Lrrk2 mutation also have an association to migraines having an abnormal calcium channelopathy. Moreover, in an article published last year, we have discovered that migraines with aura are 2.4 times more likely to cause an ischemic stroke, plus 3 times more likely to have resulted from a clot in the heart. Plus, back in 2008 the medical journal of the academy of neurology published an article stating that people with migraines are also more likely to develop blood clots in veins  (legs and lungs).  574 patients were interviewed for this study out of which 111 were found to have migraines. Out of this population of migraneurs, 19% were found to have multiple episodes of venous thrombosis compared to 8% without migraine, making a pretty good case for increase risk of venous thrombosis in those with migraines.

Now, looking back at my small number of patients 5 out of 7 have migraines, I have migraine with auras. the other 2 are not known whether they have this problem or not , and at least 2 of the 5 have had multiple venous thrombosis including a PE.

Now, we simply consider the fact that migraines occur in 12% of Americans and there are at least 2 million people with Parkinson’s. We are looking at a very large population of roughly 240,000 people who have both and are at potential risk for strokes, cardiac clots and venous thrombosis like Pulmonary embolism. but, because women are at greater risk of having migraines in a ratio of 3 :1 we are more likely to see coagulopathy in women who have both migraines and Parkinson’s. Although, much more studies need to be done based on these observations I would caution that if you have migraines and PD you discuss possibility of venous clots especially if there are abnormal posturing, are bed bound or wheelchair bound, are sedentary have, or  other risk factors for clots or have migraines with aura. May consider possible prophylactic medication like aspirin to begin with.

if you have swelling in leg especially if painful and hot seek immediate attention.

2 thoughts on “Hypercoagulation and Parkinson’s disease: Are women more at risk? by Dr. De Leon”